I’m joining the 2016 Summer Book Trek, a reading challenge that gives away daily prizes in July. My not-hard-and-fast goal is to read:

Beyond the Rising Tide by Sarah Beard (again–I got to read an ARC and loved it!) X
Courting Cassandry by Joyce DiPastena
Loving Lucianna by Joyce DiPastena X
The Cenote by Chelsea Dyreng X
By the Stars by Lindsay Ferguson
Forever and Forever by Josi Kilpack
The Spider and the Sparrow by A.L. Sowards X
Gladly Beyond by Nichole Van X
The Land of Look Behind by Aaron Blaylock X
My Loving Vigil Keeping by Carla Kelly X
The Librarian Shoots a Gun by Amber Gilchrist X
A Breach of Promise by Anne Perry

My book, Born to Treason is one of the sponsoring books/potential prizes, and the ebook will be on sale for $2.99 for the first week of July (the 1st through the 8th). The more books you read, the more chances you have to win, so if you’re looking for some fun summer reading, click here to check out the Summer Book Trek. 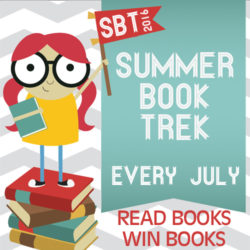 As a non-contributing member of society, apparently I would be better off dead. At least according to a friend’s co-worker, who holds this opinion of all paralyzed people. It’s a prejudice often reinforced by the media, including a certain recent book-turned-to-movie. I’ve even heard it suggested that giving a villain a disability is a great way to make them more “villainous.” Because, you know, disability=reduced humanity.

If my friend’s co-worker had been talking to me directly, she might have been surprised to know that I’m partially paralyzed–the effects of my incomplete spinal cord injury are only apparent in my slight limp and frequent clumsiness (and my chicken-peck typing)–but it’s still a disability I live with every day and, like many people with disabilities, it leads me to struggle with a lower self image and bouts of depression.

Maybe I would make the “contributing member of society” cutoff to this person, but why should she–or anyone else–get to make that call? Who’s to say who contributes–who has value–and who doesn’t? According to the CDC, 1 in 1o Americans is living with a disability (more if you include the crippling effects of mental illness), and nearly everyone will suffer some form of disability in his or her lifetime. Certainly we all still have value–we all still contribute in different ways, whether on a large scale or a small one.

It amazes me that anyone would actually have such a negative view of those with disabilities, and I can only attribute it to ignorance. The best cure for that kind of ignorance is understanding and empathy–seeing the value in a life different from one’s own. We can’t ever know exactly what it’s like to be someone else, but books can get us pretty close. The best stories feel so real that we are lost in another person’s world for a while–we become them for a few hundred pages. And once we’ve been in someone’s head, we’re never going to look at them the same way again. We may not completely agree with them, but we’re going to understand their point of view. We’ll see past the stereotype to find that their life has value too, regardless of ability or disability, race, gender, religion, sexual orientation, etc. And for those who are disabled, seeing someone who “looks like them” overcoming challenges and playing an important role in books and movies can be encouraging and empowering.

Of course, if the media continues to perpetuate stereotypes, we don’t fix anything. So, not only do we need diverse books and movies, but we need thoughtful ones with realistic, well-crafted characters to give voice to people whose words are often drowned out by the roars of a media industry more than happy to sell stereotypes if they think it will make money.

This isn’t to say disabled characters always have to be good guys, and they definitely shouldn’t be perfect angels. Protagonist, antagonist, or secondary character, make them well-rounded human beings, affected by their disability but not defined it, and it will start to broaden society’s understanding of what “differently-abled” means.

In the wake of the Orlando shootings, I saw a chart from the FBI describing the incidents of hate crimes in 2014. Among those numbers, 2,568 were motivated by race, 1,017 by sexual orientation, 1,104 by religion, and 84 by disability. Thousands of instances of violence that could be eliminated if we could help people see past their fears and stereotypes. Understanding, empathy, and love are the only cures for the violence, hatred, and obsessive divisiveness rife in our society, and it can all start with a good book.