Happy Veteran’s Day, and thank you to the brave men and women who have served and sacrificed for our freedom.

My grandfather, Frank Brooksby, was a pilot over occupied France during World War II, and his brother Victor was killed in action flying on the Pacific Front of the war. The Brooksby family seems to have been drawn to the sky, and the Brooksby girls were no exception. Family photos like the one below of three of my great aunts during World War II always interested me, and I’ve finally found out a little more about the experiences of the Brooksby girls and other female WWII pilots. 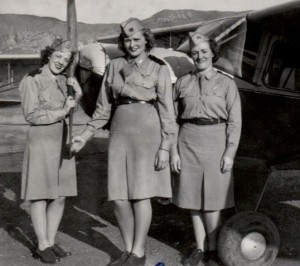 American women didn’t fly in combat in World War II (though the Russian “night witches” did!). Instead, they flew missions stateside, freeing up men to fly overseas. WASP women tested and repaired airplanes and shuttled planes, people, and cargo around the country. Women in the WASP program even flew planes hauling targets so the male pilots could practice shooting live ammo!  Thirty-nine of the slightly over 1,000 WASP volunteers died in service to their country.

The Women Air Service Pilots were not granted status as veterans until 1977 when they petitioned Congress to have their service officially recognized by the history books. Though their recognition came late, they played an important role in proving that women’s minds and bodies could handle the complexities of flying, even during menstruation (yes, that was in serious doubt at the time). Latino, Asian, and Native American women flew with the WASP program, also proving their capabilities, though black women were segregated out of WASP by their race and out of the history-making, all-black Tuskegee Airmen by their gender.

Many other women served with the Civil Air Patrol. Started just before the US entered World War II, the Civil Air Patrol formed to utilize the skills of civilian pilots in protecting the United States. CAP pilots patrolled over land and sea, performed rescue missions, and worked as couriers. It was open to both sexes and all races.

But, I wondered, how did the Brooksby girls from little Fredonia on the Arizona Strip (the patch of Arizona above the Grand Canyon, just south of the Utah border) learn to be pilots? They might have seen the occasional barnstormer or cropduster, but I doubted that planes were common in Fredonia.

Like most female pilots of World War II, I found, they trained at college-based Civil Pilot Training Programs. At least some of the Brooksby women attended Dixie Junior College (now Dixie State University) in St George, Utah (Southern Utah is known as Utah’s Dixie for the early attempts to grow cotton there). There, they took the classes to learn to fly through the Civil Pilot Training Program and then went to the Provo Flying School under the direction of Merrill Christopherson to complete their training. Once they had the necessary solo hours, they worked with the Civil Air Patrol ferrying planes across the country.

After the war, WASP women were dismissed as no longer needed by their country. Commercial airlines would not hire female pilots. Some pilots, like Utah transplant Marjorie Redding Christiansen, became air traffic controllers. Others continued to serve with the Civil Air Patrol or other community organizations. Their service was forgotten by many for a number of decades, but today we can remember their bravery and determination to serve their country.

(Below, the Brooksby pilots, minus Victor Brooksby, who was already MIA in the south Pacific.) 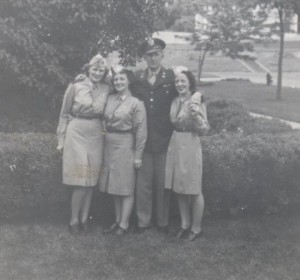